Have you ever walked into the shop and seen the dozens of different carabiners on the wall and wondered what the difference was between them all? Well, we're here to give you a rundown on the different styles and features and what they're each best suited to. First, we'll take a look at what all the different numbers and symbols written on the carabiner mean: 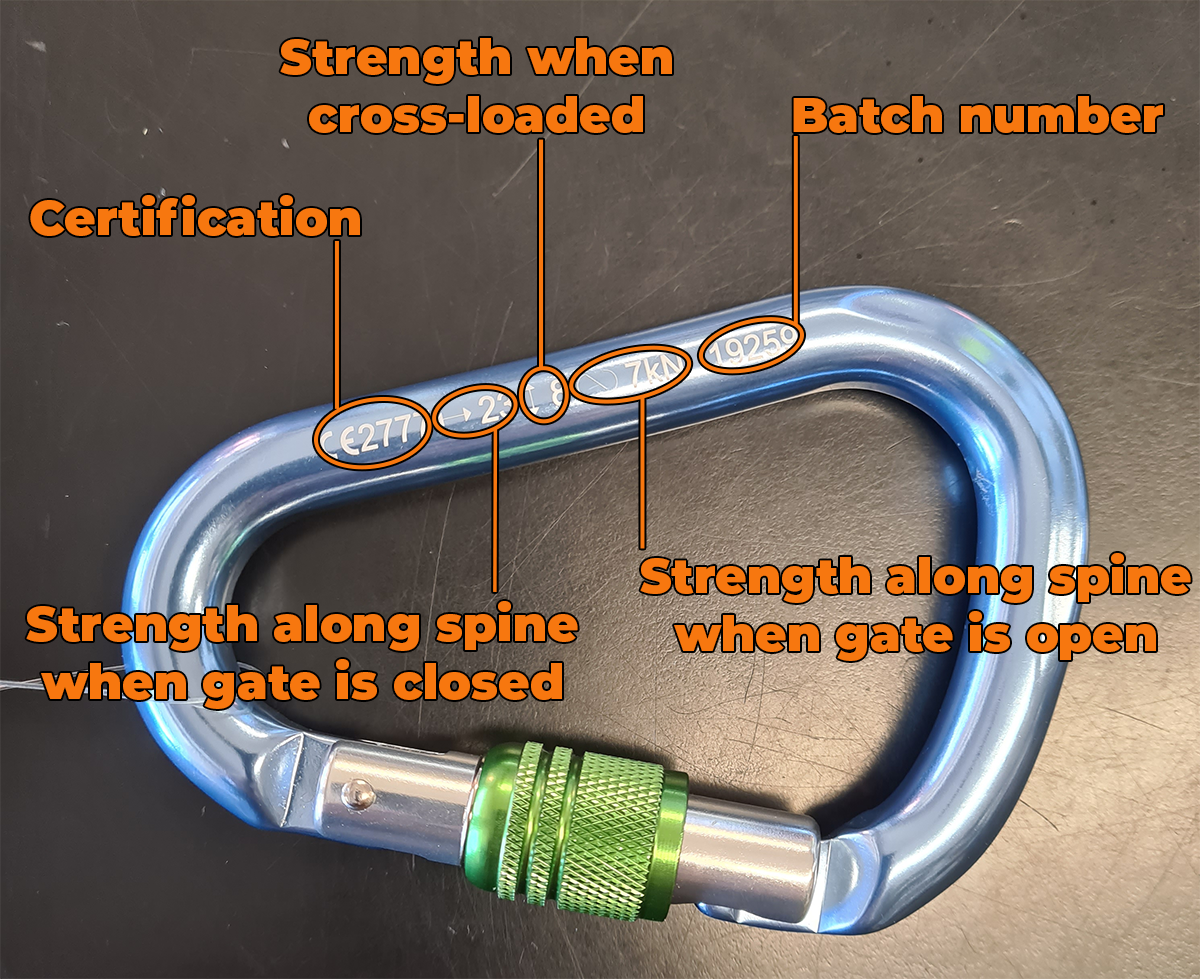 With that out of the way, let's take a look at what sets them apart from each other.

In the descriptions of the shapes below, we refer to some carabiner shapes being stronger than others. While this is an important consideration, it is also a generalisation, and there may be oval style carabiners that are stronger than D-shape carabiners, depending on other factors. If you have any doubts about the individual strength of a particular carabiner, you can refer to the ratings on its side as outlined in the image above. Rest assured that carabiners from reputable brands go through rigorous testing in order to maintain quality and meet the required standards.

The original carabiner shape, the oval has since fallen out of favour for most rock climbing applications. It's not as strong as the other shapes and typically has a pretty small gate opening, which can make clipping fiddly or even impossible in some situations. However, they're generally quite cheap and the symmetrical shape does allow for even loading. Good for: racking gear, aiding, pulleys. Check out: Petzl OK Oval, DMM Ultra Range

The D-shape carabiner is the strongest shape available due to the way it positions the load along the spine of the carabiner. They feature a wider gate opening than the oval but smaller than the other two shapes on the list. They're typically a bit heavier compared to the other shapes at the same size, but not by a huge amount. Good for: all-purpose climbing applications, anchor building. Check out: Trango Regulock, Kong Big D 737

A slight twist on the D-shape, whereby the lower end of the carabiner is narrower than the top end, the Asymmetrical D-shape is probably the most popular style of carabiner. The modified shape is useful as both a weight-saving measure and as a way to increase the gate opening size. They do tend to run at a slightly higher price than a standard D-shape, but we feel the price is worth it. Their main drawback is the lack of space inside the carabiner, so they're not ideal for racking gear. Good for: quickdraws, personal safeties, all-purpose climbing applications. Check out: Wild Country EOS Screwgate

Designed to allow for as much gear and/or rope to fit at the top of the carabiner as possible, the Pear shaped carabiner is the ideal choice for your belay device and for any time you need to load up multiple bits of kit onto one carabiner. Because the load does not sit along the spine, they aren't as strong as the D- and Asymmetrical D-shapes and they are generally slightly more expensive, but it's good to have at least one or two in your kit. Good for: belaying, abseiling/rappelling, bulky items. Check out: Mammut Classic HMS, Edelrid Bulletproof HMS

Non-locking carabiners are used predominantly for racking and clipping into quickdraws and traditional protection, where ease of clipping is vital.

As the name suggests, a straight gate is a perfectly straight gate in line with the rest of the carabiner. This is the most common type of gate and can be used in practically all rock climbing or abseiling scenarios. Check out: Mammut Crag Key Lock Straight

A bent gate carabiner has a slight curve in the gate, which makes it ideal for clipping ropes into as the rope is guided into place by the shape of the gate. These are great for the rope end of quickdraws, but you shouldn't use them for clipping into protection as they have an increased risk of unclipping themselves. Check out: Mammut Crag Key Lock Bent

Favoured for the reduced weight, wire carabiners come in both straight and bent style. These are typically found on quickdraws and used by trad and alpine climbers looking to shave as many grams as possible from their kit. Wire gates also have the advantage of being less impacted by "gate flutter", which can lead to climbers preferring them on the rope end of their quickdraws. Trango Phase Bent Wire Gate

As the saying goes, there's more than one way to lock a carabiner. Picking the right locking type for the job is important, although a standard screw gate is going to be suitable in the vast majority of recreational rock climbing scenarios. That doesn't mean it isn't worth knowing what the other options are.

The most common type of locking mechanism, a screwgate is simple, effective, and easy to use with one hand. They are slightly more susceptible to unlocking due to vibrations and/or rubbing against a rope or other surface compared to trip-lock carabiners. When used correctly, the screwgate is a cheap and safe locking type.

A twist-lock carabiner utilises a spring-based lock that you twist into an open position, and then it automatically springs back into the locked position when you release your hand. This is a quick locking method that can be used one-handed, but it does have its drawbacks: namely that it is susceptible to being accidentally twisted open. This lock type is good for situations where there is nothing moving near the carabiner or forcing it against the rock.

The trip-lock is similar to a twist-lock, but it adds extra security by requiring an additional action to unlock the carabiner - typically by requiring the gate to be pushed up or pulled down before twisting. This is the most secure locking method out of the standard locking methods, and should be used wherever maximum security is required. They’re also commonly used for industrial rope access The main drawback of this locking method is that it can be quite tricky to operate one-handed.

Once you've decided what kind of shape, lock, and gate you're after, you might think you're done. But wait, there's more!

Belay carabiners are subject to cyclic loading, which means they are loaded and unloaded repeatedly as the belayer feeds rope or takes in slack - and this can cause the carabiner to rotate out of position, putting it in the weaker "cross-loaded" position. Several brands have developed solutions to this problem that keep the carabiner oriented correctly by dividing the carabiner into two distinct sections, thereby reducing the possible range of movement. Below are a few examples. We strongly recommend that every climber uses this style of carabiner for their belay device. Check out: Mammut Smart HMS. 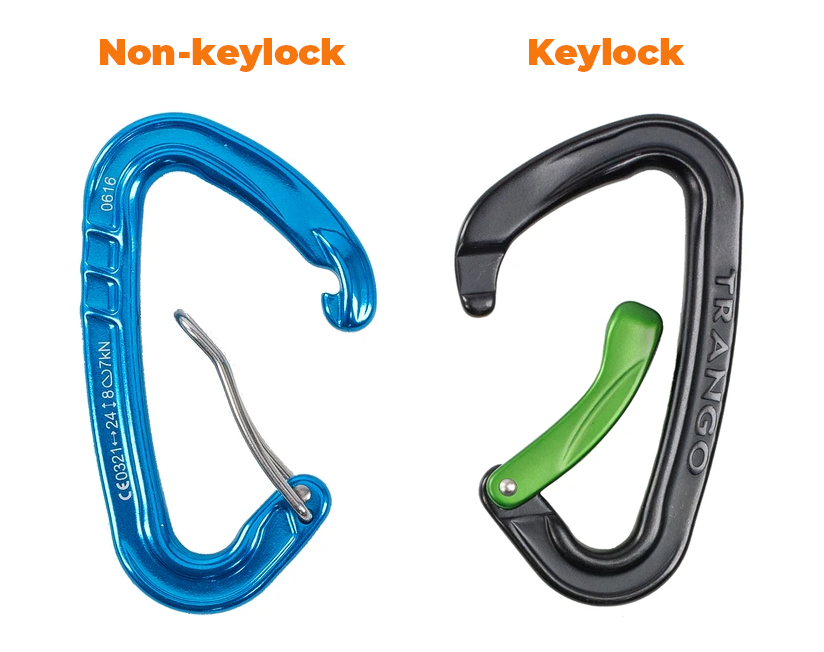 The hook that is formed at the top of an open carabiner gate can often be caught on ropes, bolts, slings, etc. This can be particularly frustrating when trying to clean a route. Some carabiners feature a "keylock" design, which removes the ridge at the top of the carabiner and reduces the chance of anything getting caught, although a steep nose angle can still lead to snags. This feature is great on quickdraws or any carabiners that are regularly being clipped/unclipped.

Climbing manufacturers are full of designers and engineers who love coming up with inventive new solutions to problems, so there is no limit to the amount of features that you might find on a carabiner. For example, the Rock Exotica Swiva-Eye Auto Lock is a favourite of our guides and instructors for connecting their personal safety attachment due to its resistance to unlocking and cross-loading.

Well, there you have it. Carabiners come in a huge range of shapes, styles, locks, and with many different features. Being aware of the options available means that you'll have a better chance of picking the right one for you. Armed with your new knowledge, the next time you see a wall full of carabiners it will hopefully be less of a mystery as to what the difference between them all is. As always, if you have any questions please don't hesitate to talk to our friendly staff on (07) 3368 3335 or online@pinnaclesports.com.au or just drop into the shop for a chat!

Check out the entire range here.